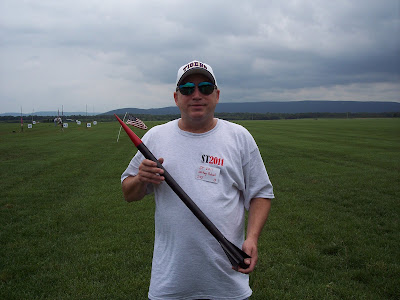 Upon my return from the Southern Thunder Rocket Launch and the successful flight of my X-104 Morganza project. I have been pouring over the data returned from the Raven flight computer. The Raven has a dual axis accelerometer, barometric altimeter, and temperature sensor all in a small circuit board the size of a postage stamp. 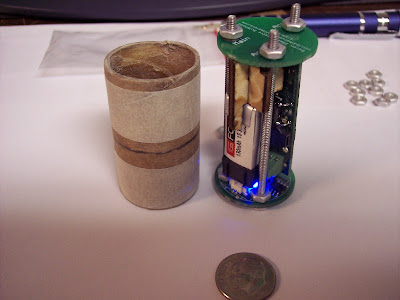 I have transcended the transonic region with small rockets frequently. Both successfully and spectacularly unsuccessfully. It was one day after one of those unsuccessful flights that I decided to study the forces involved a little more before attempting to fly again in this region of the envelope. It was then that I conceived my century series of research test vehicles. It was during testing of the X-101 through X-103 that I learned through RAS Aero flight simulations that there is aprox. 30lbs of aerodynamic force pushing down on the nose cone starting at .85 Mach through Mach 1.2. on a 29mm diameter rocket. Combine this with the 40 G's provided by the rocket motor and you can see why rockets fail when entering and exiting the transonic region. You will see in the following charts from the flight computer of the X-104 the proof that these forces exist. 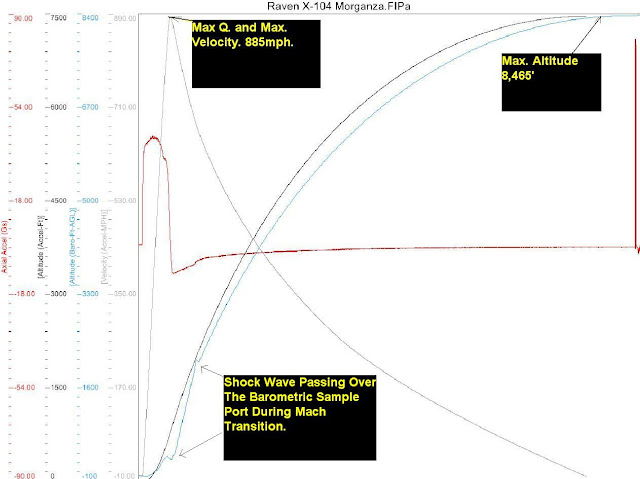 This first graph represents the first 18 seconds of flight from Lift Off to Apogee at 8,465' It also shows max. velocity of 885mph. at approx. 1.02 seconds into the flight. It is also the area of maximum dynamic pressure or Max. Q. This happens at 778' mark. This is also MECO or Main Engine Cut Off. So you can see this is the most critical part of the flight. There is alot happening in the first two seconds. The next 16 seconds is all coast phase. The next graph is a zoomed in shot of the transonic region of flight. 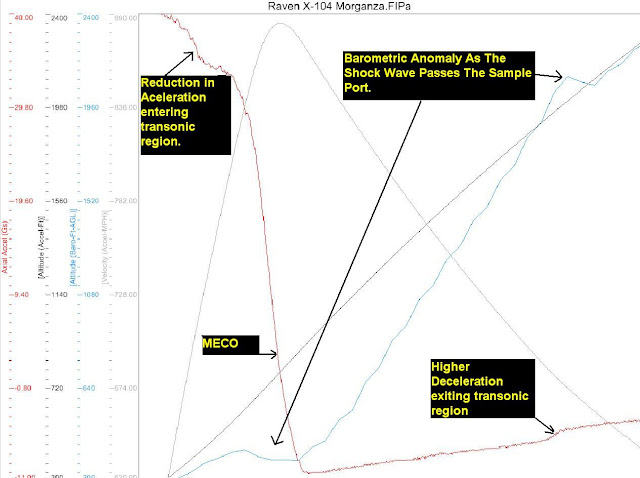 This is two seconds of flight time. From .8 seconds to 2.8 seconds. It shows the effects of the shock waves on the barometric sampling ports. It also shows the additional aerodynamic forces entering and exiting the transonic region. It also show MECO. Where the G loading goes from 40+ G's to 11- G's. As you can see these forces are huge and must be accounted for when building high performance rockets. 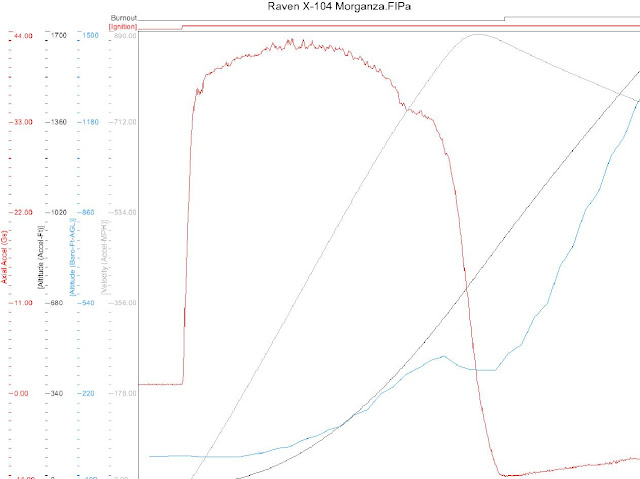 This third graph is a representation of the thrust curve of the motor. The motor I chose for this flight is an H268 Aerotech Redline. This motor has pretty much a square thrust curve when fired on a test stand. The reduction in acceleration at the tail end of the burn can be attributed to aerodynamic forces acting on the rocket as it enters the transonic region.

You can compare that to the manufactures thrust curve compiled from test stand data seen in the graph above as the magenta colored line of the H268 motor.

In conclusion I now have a first hand understanding of the forces involved and can engineer and build my high performance rockets to survive the stresses involved. I can also employ drag reducing technologies such as those derived by Theodore Von Karmen and Wolfgang Haack to enhance performance in the transonic region. Knowledge concerning motor choice was also gained. It's much easier to choose a motor with  a thrust curve to avoid transcending the transonic region at low altitude where the air is dense and the aerodynamic forces are greatest or to avoid this region all together.

This is a video of my first three century series test vehicles that preceded the X-104 Morganza. They were all identical except for fin designs. Each rocket was constructed of cardboard tubing with balsa fins utilizing fiberglass tip to tip reenforcement. From the failures it was evident that much stronger building material was going to be needed in future testing. All data gathered from these rockets was acquired from ground video and computer simulations. It was also evident that on-board data acquisition was going to be necessary to gain accurate flight data. 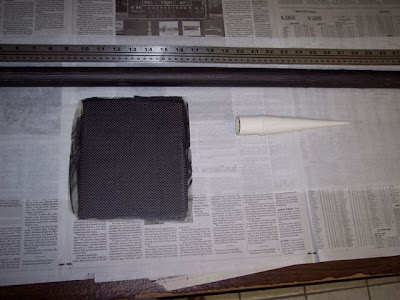 The X-104 Morganza was built entirely out of carbon fiber except for the nose cone that was fiberglass. 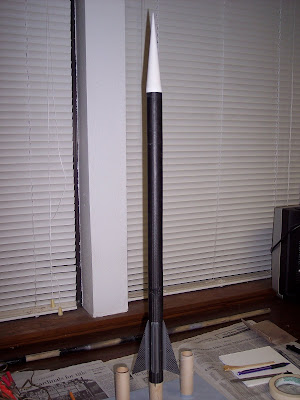 Here is a video of the flight. Enjoy.

Stay tuned for more incredible projects from BayouRat Aerospace!
Posted by Bayourat Rocketry at 10:22 AM