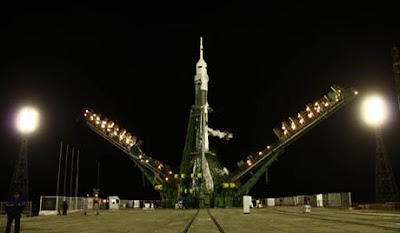 With the end of the Shuttle program and the sidelining of Americas manned space program. The Russians move ahead towards space dominance.

Russia is working on two large-scale space projects simultaneously, including the next generation of the “Soyuz” spaceships and a principally new space system with the Rus-M carrier rocket. The launching pad for it will be built in the Far East. In the future it will be possible to carry out manned flights to the Moon from there.

The decision to create a new industrial-transport space system was taken in 2006. In 20 years’ time Russia’s spaceships will be able not only to fly in low orbit but also to fly to the Moon and even to Mars. Today the Russian rocket builders are designing not only a multi-function heavy spaceships of the new generation, weighing more than 20 tons, but also light spacecraft for flights to the International Space Station (ISS), the Deputy Head of the Federal Space Agency Alexander Lopatin said in an interview with the Voice of Russia.

And as regards the heavy lift vehicle, a new rocket will be built for it. Russia already has Zenit rockets with a large carrying capacity, which will serve as a prototype for the Rus-M carrier rockets, an observer of the “Cosmonautics News” magazine, Igor Lisov, says.

"We need a new rocket because it is planned that the new spaceship will weigh more than the “Soyuz” spaceships. Besides, it will be able to carry more people and more cargoes, and it will be more comfortable. We also need a new launching pad. For this purpose, the Vostochny spaceport will be built. To make a spaceship with a starting mass of 12 or 15 tons is no problem. And a rocket for it can be built easily too. The more so as it will be modeled on a Zenit rocket, with the use of up-to-date solutions."

The construction of the Vostochny spaceport in the Amur Region will start later this summer. It will be located not far from the Svobodny Spaceport, which went out of action in 2007. The new launch complex is located at the same latitude as the Baikonur Cosmodrome, which will make it possible to fly on the ISS from Russia, not from Kazakhstan, while making such flights from the Plesetsk Cosmodrome is impossible. Thus, Russia will ensure itself an independent access to all types of orbits, the Deputy Head of the Federal Space Agency said.

The new spaceship concept, which will replace the legendary “Soyuz” spaceships, was approved last year. The first unmanned tests are set for 2015 while manned tests – for 2018. And in less than one month’s time, the model of the piloted spaceship with the Rus-M carrier rocket will be presented to the world public at the 10th International Air-Space Salon MAKS-2011.
Posted by Bayourat Rocketry at 7:27 AM