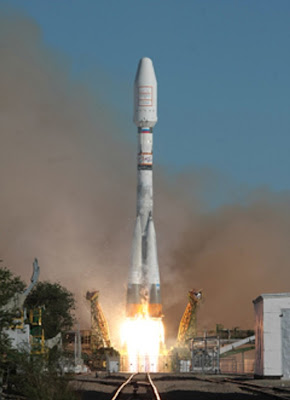 Soyuz Flight ST23 - Arianespace successfully orbited another batch of six spacecraft for Globalstar's second-generation satellite network this morning on a mission performed with the medium-lift Soyuz launcher from Baikonur Cosmodrome in Kazakhstan.

The flight was carried out on Arianespace's behalf by its Starsem affiliate, lifting off at 8:27 a.m. local time. Soyuz' Fregat upper stage then performed two successive firings, followed by the orbital injection of the six satellites 1 hour and 38 minutes after liftoff.


"We are happy to have successfully launched the 10th Soyuz for Globalstar and we are ready to get right to work for the 11th launch," stated Arianespace Chairman & CEO Jean-Yves Le Gall. "We are also proud to know that today's six satellites will join the Globalstar constellation, thus improving its ability to serve the customers - and we look forward to our continued participation in the Globalstar success."

Today's flight was the 23rd for Starsem and utilized the Soyuz 2 evolved version of Russia's venerable medium-lift workhorse launcher. Incorporating the enlarged ST payload fairing and an updated digital flight control system, the Soyuz 2 also will be used by Arianespace at the Spaceport in French Guiana - operating side-by-side with its heavyweight Ariane 5 vehicle and the future Vega lightweight launcher.

For the Globalstar missions, Soyuz 2 is equipped with a 6.7-meter-high conical-shaped dispenser, on which the six trapezoidal satellites are installed. These second-generation spacecraft were built by Thales Alenia Space and weighed approximately 700 kg. each at liftoff. They are to handle Globalstar's voice, Duplex and Simplex data products and services - including its lineup of SPOT retail consumer products.

Globalstar was the very first customer for Starsem, which was created to perform commercial Soyuz missions from Baikonur Cosmodrome. Using six Soyuz launchers from February and November 1999, it orbited 24 first-generation satellites for Globalstar - representing one-half of the company's original constellation.

From May 2007 to October 2010, two follow-on Soyuz missions lofted eight additional satellites to join the Globalstar constellation, followed last October by the first of four additional missions contracted with Arianespace to orbit a total 24 of Globalstar's second-generation spacecraft.

Source : Arianespace
Posted by Bayourat Rocketry at 12:00 AM