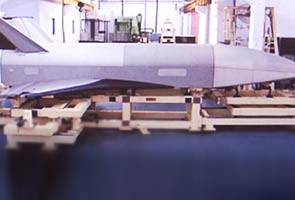 India's IDRW blog posted an intriguing image (above) earlier this week of what appears to be India's answer to the Boeing X-37B (picture below).

Though the X-37B program is shrouded in secrecy, its possible applications boggle the mind. Such spacecraft could be sent up quickly to replace satellites shot down early in a war, and theoretically take evasive action if attacked. They could also have a role in guiding UAVs and UCAVs over enemy territory, and even carry weapons into space, either for attacking targets on earth or for disrupting enemy satellites.
Posted by Bayourat Rocketry at 9:44 AM