Siberians To Sue Over Toxic Space Debris From Failed Launches 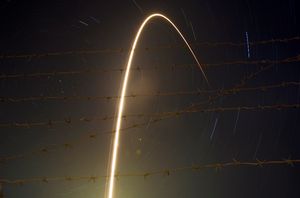 Leaders of an indigenous Siberian ethnic group on Tuesday announced plans to sue over a recent failed Russian space shot that, they claim, scattered toxic rocket debris over their tribal homeland.
"Our representatives have met with Moscow attorneys and we will definitely sue," said Maria Sakova, Tubalar tribal chief. "People call us crazy but we live here ... and toxic debris is falling on us."

A Russian Soyuz rocket launched on August 24 from Kazakhstan failed to place a satellite in orbit, leaving the satellite's transport module to break up and fall to Earth.

Russian mission controllers have said most of the debris likely landed down range in forested territory of the Altai Republic, a Russian province close to Kyrgyzstan and western Mongolia.

The Tubalar tribe is a Turkic ethnic group living primarily in the Altai's rugged Choiska region, where most of the space vehicle remnants are thought to have crashed.

Some two dozen residents of Choiska and adjacent districts reported headaches, nausea, and dizziness in the wake of the Soyuz accident. Local media was quick to link their complaints to pollution caused by the space debris.

Moscow health officials on Monday repeated statements that environmental checks throughout the Altai region have shown no increases in pollution.

Much of the territory in Choiska region has religious significance to the Tubalar tribe and it would, according to tribal belief, be sacrilegious if Russian government space debris struck it, Sakova said.

Investigators have linked both failures, the first with a Proton booster and the second with a Soyuz booster, to linking between the booster and its final stage, and subsequent final stage engine misfirings.

Remains from the transport module thought to be in the Altai mountains could help explain why it happened, mission controllers have said.

Posted by Bayourat Rocketry at 10:50 AM