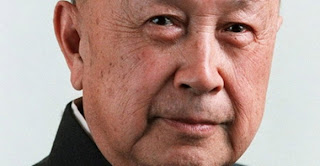 One of the most important contributors to technological advancement during the Mao era, revered father of Chinese rocketry Qian Xuesen (also known as Tsien Hsue-Shen), might never have built China’s first missile launchers had the US not forced him out in a fit of red paranoia.

Born in Hangzhou in 1911, Qian came from a family of intellectuals. In 1934, he graduated from Jiaotong University and was awarded a scholarship to MIT, where he studied aeronautical engineering. He completed graduate work at Caltech and received a PhD studying under famed aerodynamicist Theodore von Kármán.

When World War II broke out, Qian made vital contributions to the US war effort, including counter-German rocket research and developing the first successful American solid-propellant missile. After the Nazis fell, he was made a colonel temporarily and entered Germany with American troops to gather secret documents from the German aircraft and rocketry programs.

With all his contributions you’d think that when Qian applied for US citizenship in 1949 he’d be a shoo-in. But the Second Red Scare and McCarthyism instead put this top-level Chinese scientist under scrutiny and, on June 6, 1950, he was accused of having Communist sympathies and spying. Qian and his American colleagues protested; the most damning evidence against him, a list of ‘security codes,’ turned out to be a table of logarithms written in Chinese. The charges are debated to this day. Despite weak evidence, Tsien’s security clearances were revoked. He had to cease research and was under constant surveillance.

Unable to pursue his career, Qian decided to return to China, but instead was detained on Terminal Island near Los Angeles. After five years under virtual house arrest, Qian was finally allowed back to China (without any of his scientific papers or books) in 1955, in exchange for the repatriation of American pilots captured during the Korean War.

The Communist government welcomed him with open arms. Their scientists were years behind the Americans and needed a leader. He was given a position of authority and oversaw the development of electronics, machinery and metallurgical industries in an otherwise largely agrarian society. Over 20 years, he helped develop three missiles. In 1968, he also established China’s Space Flight Medical Research Center and two years later put China’s first satellite into orbit.

Qian never returned to the US, not even to receive his distinguished alumnus award from Caltech in 1979. He was seeking an official pardon that never came. Despite having made no substantial contributions to science in years, he was even named Person of the Year in 2007 by influential American Aviation Weekmagazine as a way of acknowledging China’s rapidly developing aerospace program. He died in 2009 in Beijing, still a pariah in America, but beloved as a figurehead of Chinese innovation. ML

.
Posted by Bayourat Rocketry at 7:01 PM