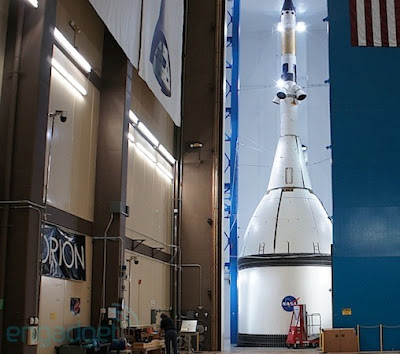 It's not every day that America designs an entirely new spacecraft. Rarer still is the creation of a vehicle that can carry man, not just machine, beyond the earth's gravitational pull. In the history of the world, there have been only eight such human transports: the Vostok, Voskhod, and Soyuz capsules from Russia, the American-made Mercury, Gemini and Apollo capsules, plus the Space Shuttle, and China's Shenzhou spacecraft. That list is going to get a new member soon, as NASA (with a big assist from Lockheed Martin) is building the most technologically advanced spaceship the Earth has ever seen; the aptly-named Orion.

In ancient Greek mythology, Orion was a hunter born of the earth who was eventually placed among the heavens by Zeus. NASA's Orion is a multipurpose crew vehicle (MPCV) that looks similar to the Apollo capsules and is here to replace the venerable Space Shuttle. It's capable of taking us further into the cosmos to than we've ever been -- to asteroids, the moon, and even Mars. This mission flexibility and interplanetary reach is what sets Orion apart from previous manned spacecraft, but that adaptability requires some heavy duty engineering and extensive testing to guarantee its ability to handle any NASA mission with aplomb. Head on past to break to learn more about how Lockheed Martin's getting the MPCV ready for deep space.

Recently, Orion went through an acoustic test at Lockheed Martin's Waterton facility just outside of Denver, Colorado, to simulate the noise conditions of a launch. We were on-hand to witness the test and check out some of the amazing gear being used to design and build this next-level spacecraft.

To perform the acoustic test, Orion got gussied up in its full launch garb, meaning the five-story tall crew module and launch abort system were swathed in alabaster heat shielding. It was ensconced inside the sizable test chamber at Lockheed's Reverberant Acoustic Laboratory, surrounded by instrumentation to record how it would respond to the sound of rockets running at full bore, and then the chamber was filled with nitrogen to ensure accurate readings. The test itself sounded like an airliner passing close overhead. It was certainly loud, but there was a two-foot thick steel door filled with sand between us and the 150dB white noise bombarding Orion. We were told by Lockheed that the test was limited to 150dB -- despite the fact that launch noises exceed 170dB -- because that increase in volume would reduce their laboratory to rubble without some serious structural additions. The good news is, enough info is gathered from a 150dB test to extrapolate how the capsule will react come liftoff.

After seeing Orion in person, we got to tour the Space Operations Simulation Center (SOSC); a massive 41,000 square foot facility meant to emulate the inky void beyond our atmosphere. The SOSC was built upon a unique geologic rock formation 1700 feet thick and surrounded by sand. Constructing the center on top of that rock keeps it as seismically isolated as possible, which allows Lockheed to accurately simulate the stillness of space. Inside, the main attraction is a cavernous room painted matte black that houses powerful lights used to mimic the sun's unfiltered rays. There's also a huge six-degree-of-freedom motion base carriage with a robotic arm capable of maneuvering 1,000 kg of spaceship, sensors or other gear with extreme precision.

Currently, the room houses a full-scale mock up of the International Space Station's docking port, and while we were there, we witnessed a simulation of the Sensor Test for Orion Relative Navigation Risk Mitigation (STORRM). The simulation replicated the STORRM test performed of the second to last Shuttle mission (STS-134), and confirmed the SOSC's ability to accurately replicate the conditions of space operations. The STORRM package is an amalgam of cameras and sensors that will allow Orion to dock with the ISS or land on a foreign world on its own -- no human input required, though an astronaut will have his hands on the control stick, you know, just in case.

The STORRM package is an amalgam of cameras and sensors that will allow Orion to dock with the ISS or land on a foreign world on its own
After the SOSC, we toured Lockheed's Collaborative Human Immersive Lab, or CHIL, for short (defense contractors do love their catchy acronyms, don't they). CHIL is a virtual reality lab that allows engineers to design and modify Orion's parts for testing and validation without going through the expense of fabricating them in the real world. Using motion tracking and VR headsets, the folks building Orion can optimize assembly processes, so that those installing the various systems on the capsule don't get in each other's way. At its core, CHIL is an assembly ergonomics optimization tool. It makes sure that the mechanical elements of Orion will work well with the people who are putting them together. We donned the CHIL gear ourselves, and while we couldn't explore Orion's inner workings (state secrets and national security prevented us from doing so), we did get to poke around a simulated tank. The experience was somewhat disorienting, as the graphics are akin to what was cutting edge in the early 90s. But, as we examined the tank's tracks and weaponry virtually, we could definitely understand its usefulness in designing systems as complex as those found in Orion.

After seeing some of the facilities being used to build our nation's next-generation spacecraft, we were awed by the sheer scope and complexity of the Orion project. Orion itself is an amazing machine, but the gear being used to design, build and test it is equally impressive. It's an astonishingly difficult task to develop a ship capable of taking man into deep space and returning him safely, which is why so much effort is being put into Orion's planning and construction.

Once upon a time, Apollo allowed us to venture far beyond our terrestrial existence, and the time is rapidly approaching when Orion will take us further into the vastness of space than ever. The final frontier is calling... and with Orion's help, we'll be answering it soon enough.

Source:engadget
By Michael Gorman
Posted by Bayourat Rocketry at 9:14 PM