X-37B Will Remain In Orbit Longer Then 270 Days 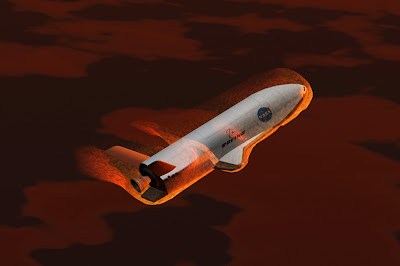 The US Air Force’s secretive X-37B space plane, launched on March 5, 2011, was designed to fly for 270 days. Day 270 came yesterday, but the military branch has decided to prolong its mission, with no sign of landing the craft any time soon.

“It’s still up there,” Major Tracy Bunko, a Secretary of the Air Force spokesperson, told MSNBC. “On-orbit experimentation is continuing.”

“Though we cannot predict when that will be complete, we are learning new things about the vehicle every day, which makes the mission a very dynamic process,” he added.

Exactly what the space plane is doing is top secret. The Air Force insists the X-37B, built by Boeing at its Huntington Beach facility, was developed to conduct orbital science experiments, but analysts say the craft is capable of much more than that.

Analysts believe X-37B could be an orbital spy plane or for tampering with enemy satellites. The spacecraft is also capable of hauling supplies to the International Space Station.

Boeing program manager Art Grantz in October proposed to build a bigger X-37C model that could ferry astronauts to the ISS, lessening NASA’s reliance on Russian Soyuz rockets to do the job at $50 million per seat.

Whatever X-37B is up to, it will be doing it for longer than the intended 270 days. The Air Force said last year that the X-37B could remain in orbit for nine months before its power and fuel ran out.

Circling 210 miles above us at 17,000 mph, the spaceship is designed to glide back to Earth guided precisely by GPS navigation signals and touchdown on a runway at Vandenberg Air Force Base in California. But when that will happen is anybody’s guess.

“We initially planned for a 9-month mission, but will continue to extend it as circumstances allow,” Bunko said in a statement released to Spaceflight Now. “This will provide us with additional experimentation opportunities and allow us to extract the maximum value out of the mission.”

Lt. Col. Tom McIntyre said in October that an extension might be possible for the X-37B when it goes up. Now that the scheduled timeline has passed, the Air Force will take it day by day, carefully monitoring the space plane.

“It’s working so well that they [the Air Force] are thumbing their noses at everyone else as they break their own records, and rightly so,” a source for the Air Force told David Axed of Wired.com.

The Air Force “gets greedy on X missions,” the insider added, using shorthand for “experimental” missions. In other words, the Air Force will want to squeeze every ounce of utility out of a unique spacecraft.

It’s not clear how long the X-37B might hold out. Once in space, the space plane unfurled solar panels to soak up the sun’s energy, increasing the craft’s power supply. Careful planning by Air Force engineers could extend the mission to up to a year, in theory. “It could be on station into April for all I know,” the source told Axe.

The X-37B resembles a space shuttle orbiter, but it is only about 25 percent its size. The X-37B has a wingspan of about 14 feet and is 29 feet long. Its payload bay is the size of a pickup truck bed, suggesting that it can deploy and retrieve satellites.

Its thermal blankets and heat shield tiles give the craft a checkered black, gray and white color. The tiles are tougher than the shuttle’s. Its electromechanical flight control system replaces the orbiter’s hydraulic actuators, and the X-37B is powered by a deployable solar panel instead of cryogenic fuel cells.

The upgrades allow the X-37B to stay in orbit far longer than the space shuttle, which was limited to about 18-day missions, according to Air Force officials.

The Air Force said it will not announce the return date of the X-37B until the time is near. When engineers do decide to end the mission, the X-37B will fire a thruster to drop from orbit and plunge back to the atmosphere, guided by GPS.

The X-37 space plane started off as a NASA project, but was taken over in 2004 by the Defense Department. The X-37 ended up becoming the Air Force’s responsibility in late 2006. The inaugural X-37 mission ended December 3, 2010 after 224 days in space.

The Air Force plans to maintain its secretive stance on the progress of its current mission. “We won’t have anything else to say until we announce a landing date, which has not yet been determined,” Bunko told MSNBC.

Managed by the Air Force Rapid Capabilities Office, headquartered in the Pentagon, the Orbital Test Vehicle program tentatively plans a third flight in the future. But the Air Force will not release a date for the next mission.

Lt. Col. Tom McIntyre, the X-37 program director, said more information on another flight could be released by the end of the year.