Elon Musk’s company, SpaceX was selected by NASA to resupply the International Space Station after the agency ended its Space Shuttle program last year. SpaceX received an initial $1.6 billion contract for a minimum of 12 flights, with an option to order additional missions. However, in order to begin the actual missions, SpaceX first has to meet the stringent performance standards set by NASA’s Commercial Orbital Transportation Services (COTS). SpaceX has already passed the first COTS test and NASA recently announced that SpaceX will be allowed to complete the objectives of COTS 2 and COTS 3 in a single mission, lifting off February 7.

This means that after separating from the Falcon 9 two-stage, liquid-oxygen and rocket-grade-kerosene (RP-1) powered launch vehicle, SpaceX’s manned Dragon craft will perform all of the COTS 2 mission objectives, which include numerous operations in the vicinity of the ISS, and will then perform the COTS 3 objectives. These include approach, berthing with the ISS, astronauts opening Dragon and unloading cargo, and finally astronauts closing the spacecraft and sending it back to Earth for recovery from the Pacific Ocean off the coast of California. If the Dragon is able to complete these tasks successfully, NASA plans to begin regular SpaceX flights to the Space Station later this year. NASA hopes for two flights in 2013 and three flights in 2014. 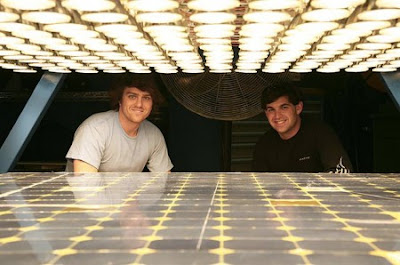 This being an Elon Musk company, there must be some some element of cutting edge renewable technology. And for this mission it’s the Dragon spacecraft’s use of deployable solar arrays stored in its trunk area as its primary power source for running sensors, driving heating and cooling systems, and communicating with SpaceX’s Mission Control Center and the Space Station. Dragon’s solar arrays generate up to 5,000 watts of power — enough to power over 80 standard light bulbs.

The solar arrays, shielded by protective covers during launch, deploy just minutes after Dragon separates from the Falcon 9 second stage, as it heads towards its rendezvous with the Space Station. While many commercial satellites and NASA missions such as the Hubble Space Telescope use solar arrays, Dragon will be the first American commercial transport vehicle to do so. 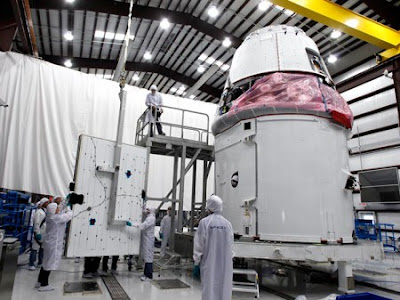 Past American spacecraft like Mercury, Gemini, Apollo and Shuttle used fuel cells or battery packs. Fuel cells are limited by the amount of chemical reactants (typically oxygen and hydrogen) that the vehicle can carry. Batteries alone are limiting due to their mass and the amount of power they can carry. 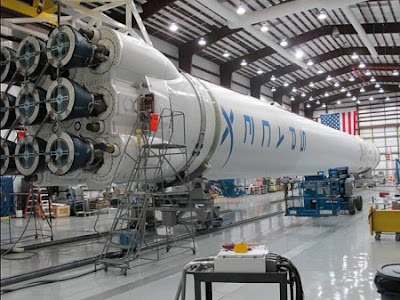 Solar energy provides a key benefit — long-term power. Combining Dragon’s solar arrays with a compact and efficient battery pack provides a reliable and renewable source of power. When in the sun, Dragon’s solar arrays recharge the battery pack, and the charged batteries provide power while Dragon passes through the Earth’s shadow. With solar panels, Dragon will have the power it needs for longer trips, whether to the Space Station or future missions to Mars.