Next Manned Soyuz Mission To The ISS Postponed One Month. Phobos-Grunt Failure Blammed On Space Radiation. 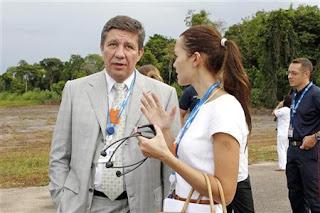 (Reuters) - Russia blamed radiation on Tuesday for a computer glitch that doomed its Mars moon mission, but space industry experts cast doubt on the findings of an investigation into the crash of what was to be Moscow's first deep space mission in two decades.

The Phobos-Grunt spacecraft was stranded in Earth orbit after launch in November and crashed into the Pacific Ocean this month, one of five recent botched Russian launches.

Now Space agency chief Vladimir Popovkin also said Moscow would postpone the next U.S.-Russian manned mission to the International Space Station by one month from March over technical problems during testing of the Soyuz spacecraft.

The delay, which officials said was due to glitches with the Soyuz descent capsule, is likely to fuel concerns over relying solely on Russia to take astronauts into orbit.

"The most likely reason, in the opinion of the commission, was the local impact of heavily charged space particles that led to a failure in the memory of the main onboard computer in the second stage of flight," Popovkin told Russian news agencies in Voronezh, a town 450 km (280 miles) south of Moscow.

A burst of space radiation caused the onboard computers to reboot and go into standby mode, he said.

Popovkin said foreign-made counterfeit or defective microchips were partly to blame for the failure of the $165-million spacecraft, designed to retrieve soil samples from the Martian moon Phobos.

Popovkin had earlier hinted that foreign sabotage might be behind the failure, in an apparent attempt to deflect blame.

Experts said Moscow was blaming external factors for the loss of its ambitious Mars mission to distract from chronic failings with its once-pioneering industry.

"You can fantasize about everything. This is one of a number of possible reasons but one that is convenient for many people," Alexander Zakharov, the mission's lead scientist, told Reuters.

"Even if this was the true reason, which we can't completely rule out because it does happen, then there is some kind of problem with the flight system or the programming, which were not designed to guard against this (space radiation)."

State RIA news agency cited an industry source as saying it was "simply absurd" that Phobos-Grunt had not been made to withstand cosmic rays on its two-year interplanetary mission.

"They did not make a vacuum cleaner but a spacecraft that is intended to fly in the aggressive environment of outer space. They couldn't have failed to take this into account," the source said.

Another space industry source said potentially damaging bursts of radiation were highly unlikely in low-Earth orbit, where hundreds of satellites circle within the protective bubble of the planet's magnetic field.

"This usually happens with interplanetary satellites around Mars or Venus, in other words, in deep space," the source told RIA. "This phenomenon occurs every one or two years on average, but it is very unlikely to see it in low-Earth orbit."

Earlier Tuesday, the head of Russia's manned space program, Alexei Krasnov, said flaws with the hermetic sealing on the Soyuz TMA-04M re-entry were found during testing.

The mission, which was due to launch on March 30, will be delayed to allow time for a new capsule to be readied, likely delaying other missions as well.

(Reporting By Alissa de Carbonnel; Editing by Janet Lawrence)
Posted by Bayourat Rocketry at 8:55 AM