Mars Is In Retrograte. Best Viewing For 2012 Coming In March. 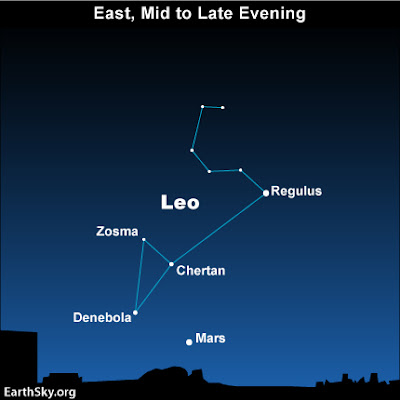 That most fascinating of planets – the red planet Mars – starts to retrograde or go westward in front of the backdrop stars on January 25, at 1 Universal Time (UT). For clocks in the Central Time zone in North America, the Martian retrograde begins today (January 24, 2012) at 7 p.m. CST. This event marks the beginning of the best several months in 2012 in which to see Mars.

In late January 2012, Mars rises over the eastern horizon at mid to late evening. In the weeks and months ahead, Mars will continually rise earlier at evening. By early March 2012, Mars will be out all night long, rising in the east around sunset and setting in the west around sunrise. Then it’ll be at its brightest for this two-year period. 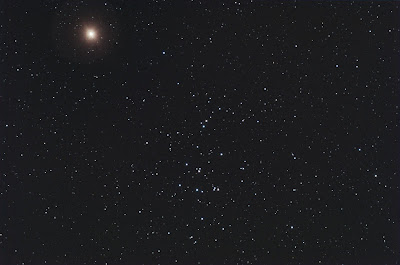 A Martian retrograde happens every other year. A retrograde is special because it’s during this period that Mars shines particularly brightly in our sky. In the middle of this retrograde, in early March 2012, Earth will fly between Mars and the sun. Mars will come closest to Earth around that time and shine at its brilliant best for the year. Mars’ retrograde will end on April 15, 2012, at 12 Universal Time. Afterwards, we’ll still be able to see Mars, but its time of greatest brightness in our sky will be over. So the next several months are prime for Mars watching!

If you could look down upon the solar system from above, you’d see that the Earth and Mars (and all the planets) are moving eastward around the sun. As seen from Earth, however, Mars appears to go westward (retrograde) beginning now and through April 2012. This retrograde motion for Mars happens whenever the Earth in its smaller, faster orbit laps Mars, the next planet outward from Earth. Earth is like a race car on the inner track passing a slower race car on the outer track. 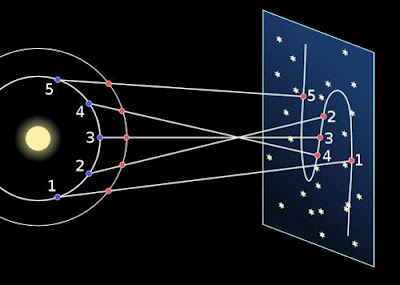 
Mars' retrograde loop in front of the constellation Aquarius in 2003
Tonight, Mars shines near the border of the constellations Virgo and Leo, fairly close to the Leo star Denebola (“the Lion’s Tail”). At the beginning of a retrograde, Mars’ change of position isn’t really noticeable even after a couple of weeks.

But keep watching, as Mars continues to move westward toward Regulus, the brightest star in the constellation Leo. (See chart at top of page.) Mars’ motion in front of the stars will become obvious after a month or so, when the red planet finally lines up with the two Leo stars, Zosma and Chertan, in late February 2012.

Watch as the red plant Mars makes its retrograde loop in front of the constellation Leo, starting tonight!

Bottom line: The planet Mars begins retrograde or westward motion in front of the backdrop stars on January 25, at 1 Universal Time (UT). For clocks in the Central Time zone in North America, the Martian retrograde begins today (January 24, 2012) at 7 p.m. CST. We will pass between the sun and Mars in early March 2012. Look for Mars in the coming months!