Today, Space Exploration Technologies (SpaceX) made history when its Dragon spacecraft became the first commercial vehicle in history to successfully attach to the International Space Station. Previously only four governments – the United States, Russia, Japan and the European Space Agency – had achieved this challenging technical feat.


The vehicle was grappled by the station’s robotic arm at 9:56 a.m. Eastern. Dragon’s passive common berthing mechanism successfully attached to the orbiting laboratory at 12:02 p.m Eastern. 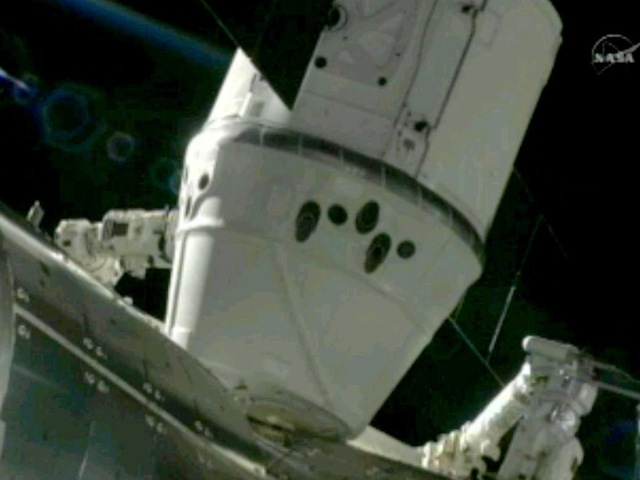 When asked for his initial thoughts on Dragon’s capture and move into the history books, Elon Musk stated, “just awesome.”


This is SpaceX's second demonstration flight under a 2006 Commercial Orbital Transportation Services (COTS) agreement with NASA to develop the capability to carry cargo to and from the International Space Station. Demonstration launches are conducted to determine potential issues so that they might be addressed; by their very nature, they carry a significant risk. If any aspect of the mission is not successful, SpaceX will learn from the experience and try again.

May 23: Dragon orbited Earth as it traveled toward the International Space Station.

May 24: Dragon’s sensors and flight systems were subjected to a series of complicated tests to determine if the vehicle was ready to berth with the space station; these tests included maneuvers and systems checks in which the vehicle came within 1.5 miles of the station.

May 25: NASA gave Dragon the GO to attempt berthing with the station. Dragon approached. It was captured by station’s robotic arm and attached to the station.

May 31: Dragon is detached from the station and returns to Earth, landing in the Pacific, hundreds of miles west of Southern California.

Posted by Bayourat Rocketry at 6:44 PM