The Legacy of Discovery 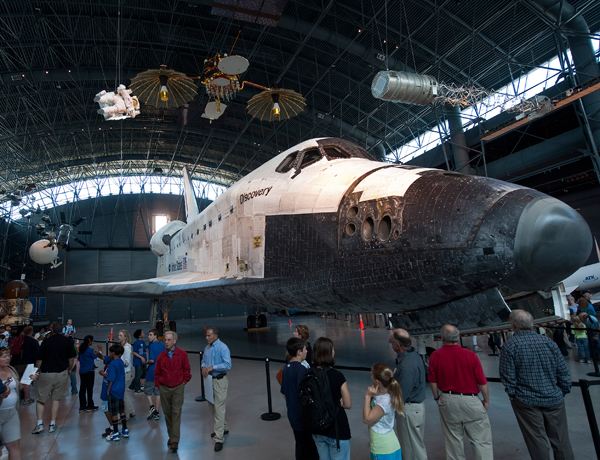 
The chance to see the Air France Concorde, the second world war Hawker Hurricane and the undeniably evil-looking airframe of the SR-71 Blackbird is not to be sniffed at. But the newest exhibit at the Smithsonian's National Air and Space Museum at the Steven Udvar-Hazy Center near Washington DC’s Dulles Airport, puts these feats of aeronautical engineering to shame. At the back of the museum’s hangers you get to come nose to nose with NASA’s just-retired space shuttle, Discovery.


There has, of course, been a space shuttle at the Udvar-Hazy for many years but not one so scarred, pitted and, frankly, dirty as this one. “Discovery’s spot was once occupied by Enterprise,” says Valerie Neal, Discovery’s curator. “but Enterprise was pristine. It had never flown in space and parts of it were unfinished or just dummies. Discovery is so much more exciting - the real thing.” That’s a thought tens of thousands shared when they turned out on roadsides and rooftops to see Discovery’s arrival into Washington DC in April. Crowds ran through the museum doors the day it first went on display.

And Neal is right, it was obviously a working vehicle. The protective heat-shield tiles are burnt where the atmosphere has scored them - some are damaged. The blankets on the orbiter’s upper surfaces no longer gleam white - they have become tanned with age. It really does look like it has flown in space 39 times. “Look how the burn marks on the tiles are almost vertical to the orbiter’s body,” Neal remarks. “That’s because of the angle at which the shuttle descends through the atmosphere, 17 times steeper than an airliner descends.”

During deceleration, from 28,000 to 350 kilometres per hour in a mere 45 minutes, the tiles on the underside and the front edge of the stubby wings had to withstand temperatures of up to 1650 °C. To withstand that kind of heat the tiles are made of 10 per cent high purity silica, with the remaining 90 per cent just empty space to aid cooling. Each tile has been individually shaped for its exact position on the orbiter, and while roughly 100 were replaced after each mission, because of heat damage or a collision with specks of space debris, 16,000 still remain from Discovery’s first flight in 1984.

The fuselage is pitted with ports. These holes were used for manoeuvring, cooling and vents for the shuttle’s waste products. Combined with the texture of the craft’s tiles, it gives the whole thing a surprisingly porous appearance - far different from the shiny, sealed shuttle I had always imagined.

Despite having a new prize exhibit outside her office, Neal is disappointed that the shuttles no longer fly. “The budget isn’t there any more,” she laments, “and using commercial vehicles, like the new Dragon capsule, saves money. The orbiters were never fully reusable. They couldn’t return to Earth and launch again without heavy servicing between missions.”

But Discovery achieved a huge amount, spending a total of 365 days in space over its 39 missions. Used to launch the Hubble telescope, it also broke an altitude record for orbiters. “It was the champion of the entire shuttle fleet,” says Neal. “It carried Eileen Collins, the first female pilot of a shuttle in 1995 and had already carried Frederick Gregory, the first African American commander of a shuttle mission in 1989. Senator John Glenn (the third American in space) returned to space in Discovery aged 77 and it carried the first Russian launched in an American spacecraft, Sergei Krikalev.”

This is the key to Discovery’s most important legacy, says Neal. The very first astronauts were white male air force officers. Since then Discovery has carried people into space from all walks of life - regardless of sex, race and nationality. “The pool of people capable of going into space has increased so much and Discovery reflects this,” she explains. “Space travel has changed hand-in-hand with society. This is what Discovery represents.”

Posted by Bayourat Rocketry at 8:58 AM