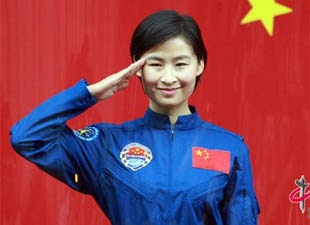 AsianScientist (Jun. 16, 2012) – China broke into a celebratory mood on Saturday night at 4:09 p.m. (IST) with the successful launch of the Long March 2F rocket carrying the Shenzhou-9 spacecraft and a three-man crew from the Jiuquan launch complex.


The nearly 55-meter two-stage rocket thundered into the night sky over the vast launch complex, and ten minutes after lift off when Shenzhou-9 separated from the vehicle and entered orbit, scientists and engineers at the Jiuquan and Beijing mission operations control room heaved a sigh of relief and exchanged congratulatory handshakes. The flight so far was a success.


The hi-tech rocket is equipped with a fault monitoring and diagnosis system. It has an escape tower and in an emergency the tower will pull the orbiting capsule as well as the re-entry capsule away from the rocket to ensure the safety of the taikonauts.

Like Soyuz, Shenzhou consists of three modules – the orbiting module, a re-entry module, and a service module. Its total mass is about 7,840 kg.

Shenzhou-9 arrived at the Jiuquan launch complex on April 9 followed by the rocket on May 9. On June 7 the spacecraft and the rocket were integrated and were moved to the launch pad on June 9.

Just before lift off on Saturday, China’s divers from 6,055 meters below the sea wished the mission success and so also Nasa and some US astronauts.

The present mission has a two-fold significance. For the first time China has launched a woman into space – 33-year-old Liu Yang. Her main role would be to improve the efficiency of the crew on board Shenzhou-9 and carry out medical experiments. Days before the launch she said: “Aside from completing the mission, I also want to experience the fantastic weightless environment and enjoy the view of our beautiful earth and our beautiful home.”

Second, for the first time China will be executing a manual docking with the Tiangong-1 space laboratory which is expected to take place on Monday. If China succeeds in this task it will be the third country to accomplish manual docking along with the US and Russia.

The other two members of the crew are Jing Haipeng, the commander of the mission, and Liu Wang.

China’s long march to the moon

At 3:42 p.m. (IST) when the final rocket tower enclosure opened a commentary on China Central Television (CCTV) said: “This is not a race, but to achieve certain milestones in China’s space program.”

It said that China may be the first country to return humans to the moon and perhaps even accomplish the first manned landing on Mars.

Current plans envisage Shenzhou-9 remaining docked with Tiangong-1 for about a fortnight before returning to earth. Of the three crew members, one will remain on board Shenzhou-9, while two others will enter Tiangong-1.

Director of China Academy of Launch Vehicle Technology, Liang Xiaohong, has been quoted as saying that the Shenzhou-9 mission is the 10th launching program in China this year. And, 2012 is the 20th year since China initiated its manned space projects. “The success of the Shenzhou-9 mission will play a crucial part in China’s future plan to build space stations,” he said.

U. R. Rao told Asian Scientist Magazine: “I think it is a wonderful thing and it is a great achievement. China’s has performed remarkably well all these years in the space sector and they have surpassed India in the critical field of rocket technology,” he said.

“In the 80s India was far ahead of China in the space sector, but now China has overtaken India,” he said, while emphasizing that India should follow its own path in the field of space technology.

The space lab Tiangong-1 which means Heavenly Palace was launched on September 29, 2011 and earlier this month it was lowered to the docking orbit.

China plans to launch Tiangong-2 and -3 before going in for a real space station around 2020. China’s permanent representative to the UN and other international organisations in Vienna, Cheng Jingye, said that China is willing to cooperate with other countries and provide opportunities for more countries particularly developing nations in the construction of the Chinese space station.

The station will be placed in the low earth orbit and will incorporate indigenous design with international compatability. The building and launching of the space station is part of Project 921 of the Chinese space program which began in 1999

Posted by Bayourat Rocketry at 10:12 AM