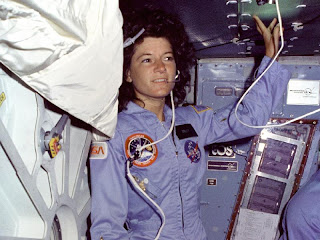 In a space agency filled with trailblazers, Sally K. Ride was a pioneer of a different sort. The soft-spoken California physicist broke the gender barrier 29 years ago when she rode to orbit aboard space shuttle Challenger to become America’s first woman in space.

"Sally Ride broke barriers with grace and professionalism – and literally changed the face of America’s space program," said NASA Administrator Charles Bolden. "The nation has lost one of its finest leaders, teachers and explorers. Our thoughts and prayers are with Sally's family and the many she inspired. She will be missed, but her star will always shine brightly."

“Sally was a personal and professional role model to me and thousands of women around the world,” said NASA Deputy Administrator Lori Garver. “Her spirit and determination will continue to be an inspiration for women everywhere.”

Ride’s contribution to America’s space program continued right up until her death at age 61 this week. After two trips to orbit aboard the shuttle, she went on an award-winning academic career at the University of California, San Diego, where her expertise and wisdom were widely sought on matters related to space. She holds the distinction of being the only person to serve as a member of both investigation boards following NASA’s two space shuttle accidents. She also served as a member of the Review of U.S. Human Spaceflight Plans Committee, also known as the Augustine Committee, in 2009, which informed many of the decisions about NASA’s current human spaceflight programs.

However, Ride’s place in history was assured on June 18, 1983 when she rocketed into space on Challenger’s STS-7 mission with four male crewmates.

“The fact that I was going to be the first American woman to go into space carried huge expectations along with it,” Ride recalled in an interview for the 25th anniversary of her flight in 2008. “That was made pretty clear the day that I was told I was selected as a crew. I was taken up to Chris Kraft’s office. He wanted to have a chat with me and make sure I knew what I was getting into before I went on the crew. I was so dazzled to be on the crew and go into space I remembered very little of what he said.”

“On launch day, there was so much excitement and so much happening around us in crew quarters, even on the way to the launch pad,” Ride said. “I didn’t really think about it that much at the time . . . but I came to appreciate what an honor it was to be selected to be the first to get a chance to go into space.”

Ride joined NASA as part of the 1978 astronaut class, the first to include women. She and five other women, along with 29 men, were selected out of 8,000 applicants. The class became known as the “Thirty-Five New Guys” and reported to the Johnson Space Center the next summer to begin training. Ride trained for five years before she and three of her classmates were assigned to STS-7. The six-day mission deployed two communications satellites and performed a number of science experiments.

Following that historic flight, Ride returned to space on another shuttle mission, STS-41G in 1984. The 8-day mission deployed the Earth Radiation Budget Satellite, conducted scientific observations of Earth, and demonstrated potential satellite refueling techniques. She was assigned to a third flight, but transitioned to a role on the Rogers Commission that investigated the Challenger accident after that shuttle was lost in January 1986. When the investigation was completed, she accepted a job as a special assistant to the NASA administrator for long range and strategic planning.

Born May 26, 1951, Ride was a native of Los Angeles and graduated from high school there in 1968. Ride enrolled at Stanford University, where she earned four degrees, including a doctorate in physics in 1978. She also was a accomplished athlete who played varsity tennis at Stanford after being nationally ranked as a youth.

Ride received numerous honors and awards during the course of her career. Most notably, she was inducted into the National Women's Hall of Fame and the Astronaut Hall of Fame, and received the Jefferson Award for Public Service, the von Braun Award, the Lindbergh Eagle, and the NCAA’s Theodore Roosevelt Award.

From: NASA.gov
Posted by Bayourat Rocketry at 9:29 AM