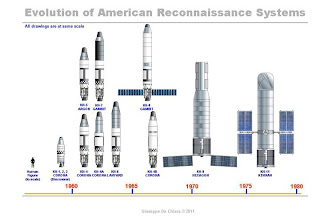 I remember when the Hubble was launched. It was a well kept secret that the NRO had there own space telescopes. Of course they were pointed in the opposite direction. Looking down and not up. So this comes as no surprise that these optical super spys could be repositioned to look up. Both sats. are reported to be of the KH-11 variety. The KH-11 is reported to see objects the size of a lunch box from orbit. While this story originally broke in Jun 2012. There has been no official release of intentions to use these two spy birds by NASA. The NRO has been silent about the whole deal. Not surprisingly since the KH-11 program is still top secret. Although recently the vale has been lifted slightly to reveal the cold war programs. KH-7, KH-8 and KH-9. With there entries into the USAF museum at Wright, Patterson Air Force Base, Ohio. There has been no mention of KH-10 or 11 even existing. Although the program has existed since the early 70's. It will be interesting to see how and when NASA uses these two spy birds. So far it's been speculated that so called dark energy could be there target.

Posted by Bayourat Rocketry at 8:08 AM