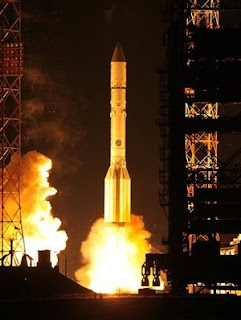 MOSCOW -- Russia's space pride suffered another blow Tuesday when a booster rocket failed to place two communications satellites into target orbits, a mishap that came a day after NASA successfully landed a robotic vehicle on Mars.


Russia's Roscosmos space agency said the Proton-M rocket was launched just before midnight Monday from the Russian-leased Baikonur cosmodrome in Kazakhstan. The booster's first stages worked fine, but the upper stage intended to give the final push to the satellites switched off prematurely.

The agency said that the engine's malfunction stranded the Russian Express MD-2 and Indonesia's Telkom-3 satellites in a low orbit where they can't be recovered.

The failure comes a day after NASA managed to land a roving laboratory the size of a compact car on Mars after an eight-month, 352-million-mile (566-million-kilometer) journey.

A Russian robotic probe designed to study a moon of Mars got stranded in Earth orbit after its launch in November and eventually came crashing down in January.

A few months before, a Soyuz booster rocket similar to those ferrying crews and cargo to the International Space Station failed, prompting officials to consider leaving the space outpost unmanned. Russian space officials eventually tracked down the reason, saying it was caused by "accidental" manufacturing flaws and the Soyuz launches resumed.

Those mishaps followed other failures. Russia lost three navigation satellites in December 2010, then a military satellite in February 2011 and a telecommunications satellite in August of that year.

Officials blamed the botched launches on the post-Soviet industrial meltdown that stymied modernization of a once-proud space program, which put the first satellite in orbit and sent the first human into space. Despite a steady increase of funding thanks to oil revenues, Russia's space industries continue to rely on obsolete equipment and an aging workforce, and production standards have degraded.

"It's very difficult to get out of the pit the Russian space industries have fallen into," said Igor Marinin, the editor of the Novosti Kosmonavtiki monthly magazine that covers space industry news.

Russia's space agency chief Vladimir Popovkin has ordered the establishment of quality inspection teams at plants that produce rocket parts. The inspectors have the authority to halt production if they see that a plant is struggling to maintain quality standards.

Marinin said that Popovkin's move was a step in the right direction. "It has already yielded some immediate results, making the Bulava (intercontinental ballistic) missile capable of flying. But it appears that it hasn't been properly organized at every plant and is not working everywhere yet."

Popovkin's predecessor, Anatoly Perminov, who lost his job after previous launch failures, also said that the latest failure had likely been rooted in a manufacturing flaw.

Marinin said that despite Tuesday's failure, the Proton rocket, capable of launching massive satellites into high orbits, will remain popular among global customers. The rocket manufactured by the Moscow-based Khrunichev company has been the main cash-cow for the space industry since its darkest days in the 1990s.

"Proton is a very good and solid design," Marinin said.

NASA has also experienced an array of launch failures, including those of two high-profile climate research satellites. The Glory satellite, which was to collect long-term climate data, crashed in 2011 after the rocket's nose cone failed to separate. In 2009, the Orbiting Carbon Observatory, to monitor atmospheric carbon dioxide, crashed off Antarctica after payload fairing failed to separate from the rocket.

The European Space Agency's Ariane 5 rocket, used for launches from the cosmodrome in French Guiana, has not experienced a launch failure since 2003.


Posted by Bayourat Rocketry at 12:03 PM