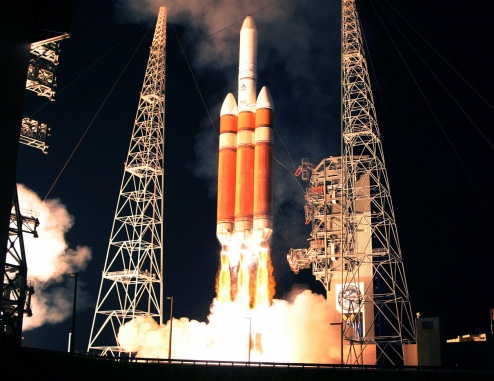 The U.S. Air Force’s Reusable Booster System (RBS) lacks a mature business case, but the service should continue to pursue key technology challenges as well as a pathfinder flight-test program, according to a National Research Council (NRC) panel.


The 15-member panel, chaired by David M. Van Wie of the Johns Hopkins Applied Physics Laboratory, found the RBS initiative confronted by a paradigm shift outside the technical realm: a transition away from government-developed systems like the United Launch Alliance-operated Atlas V and Delta IV Evolved Expendable Launch Vehicles (EELVs) that currently meet the nation’s national security space lift needs to commercially developed launchers like the SpaceX Falcon 9 that are designed to meet the needs of multiple customers.

The concept envisions the use of a reusable hydrocarbon/liquid oxygen fueled first stage that would separate from upper stages at 30 km altitude, execute rocket-powered return-to-launch-site (RTLS) maneuvers, and glide back to a horizontal launch site landing for refurbishment.

“Given the significant number of commercial initiatives pursuing novel approaches to achieve launch capabilities, the future of space lift may look very different from those employed today,” the panel’s 122-page report concludes in part.

“With global competition to reduce launch costs, it is anticipated that recent EELV costs may not be the proper baseline for cost comparisons.”

Air Force Space Command initiated assessments of an RBS cost savings potential in mid-2011, as NASA’s space shuttle program headed into retirement. The closing of the 30-year shuttle program shifted substantial future subcontractor support costs to the EELV program, which was kicked off in 1998.

In all, the NRC panel produced a half-dozen findings and an equal number of recommendations after assessing RBS efforts to date by the Air Force Research Laboratory, the Space and Missile Systems Center and other organizations.

In late 2011, the Air Force initiated a four-phase pathfinder flight-test initiative to build a small scale flight-test vehicle by mid- to late-decade to demonstrate the rocket-back and RTLS maneuvers as well as rapid ground processing procedures.


In the operations scenario envisioned by the Air Force, the pathfinder would lead to a mid-scale version of the RBS capable of suborbital test missions as well as an orbital test flight.

The mid-scale initiative would include a pair of high-fidelity “Y” RBS prototypes for later conversion to operational flight vehicles.

The full-up concept envisions eight RBS vehicles, half based at Cape Canaveral and half based at Vandenberg Air Base, Calif., where they would support an average of eight national security missions annually.


Posted by Bayourat Rocketry at 10:39 PM