The Command and Service Modules 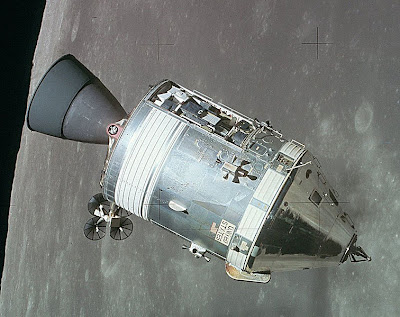 The Command Module is the most complex piece of hardware in the entire stack.
The Command Module has a double structure, comprised of the cabin and the outer wall. For heat shielding, the outer wall is made of stainless steel brazed honeycomb between steel alloy face sheets. It protects the inside of the ship from the heat of the sun and the heat from atmospheric friction during re-entry. The thickness of this outer wall varies from 0.5-inch (1.27cm) to 2.5-inch (6.35cm). The cabin is built with a honeycomb structure of aluminum mated with an aluminum alloy. The thickness of the wall of this tin can varies from 0.25-inch (6.35mm) to 1.5-inch (3.81cm). Insulating fiber is placed between the outer wall and the cabin. Phenolic, a synthetic material made by applying heat and pressure to layers of paper or glass cloth impregnated with synthetic resin, coats the surface of the Command Module. It shields the CM from frictional heat by melting during re-entry. The thickness of this coating is 0.5-inch (1.27cm) all around, except for the bottom, which is 2-inch (5.08cm). This brings the CM's weight to 3000lb (1362kg). Thermal coating made of silver Mylar is applied on top of this. This gives the CM the appearance of being wrapped in aluminum foil, giving the CM it's reflective look. The cockpit is divided into three parts. The docking tunnel is the forward compartment. The crew compartment is the area in which the astronauts spend their time. Finally, there is an aft compartment in the back of the CM. The forward compartment is separated by a bulkhead from the cabin, and is divided into 4 areas at ninety-degree angles. Earth landing equipment like parachutes and beacon lights are stored here. This area is covered with the forward shield cover, which is installed under the LES legs. This cover is jettisoned with when the CM is at approximately 25,000 feet after re-entry, preparing for the deployment of the parachute. The cabin is filled with pure oxygen at about 1/3 sea-level atmospheric pressure, and a temperature of 21-24 degrees Celsius (70-75 Fahrenheit). The astronaut's seating follows traditional seating in an airplane. The left seat is for the Commander (CDR), the center seat is for the CM Pilot (CMP), and the right seat is for the LM pilot (LMP). These gcouches are made of steel framing and tubing and covered with a heavy, fireproof fiberglass cloth. There is room for two people to stand when the center couch is folded down. Two sleeping bags are installed behind the left and right seats, and two astronauts at a time can sleep. Each seat is supported by eight struts, which compress to absorb the shock when the spacecraft splashes down. Mirrors to confirm the installation of the harness when an astronaut dons his spacesuit are attached to each seat.

Materials such as water and food are packed and stored in the wall on the side of the cabin. After launch, the astronauts remove their spacesuits, and wear overalls in the cabin. The astronauts normally only wear their spacesuits during launch, LM docking and undocking, moving between CM and LM, EVA, and re-entry. The commander usually handles the operation of the ship, while the CMP does navigation, and the LMP monitors and operates the sub-systems. While the CDR and LMP are on the surface of the moon, the CMP handles observation of the surface and serves as a communications relay between the Earth and LM, in addition to the normal work of the CDR and LMP. Of course, all three astronauts are trained in all systems and procedures, so that in the event of an emergency, even a single person can still safely return to the Earth.
Two nitrogen gas bottles and cylinders are installed into the cabin's hatch. When an emergency occurs during launch, one of the bottles is used for explosively opening the hatch. After a normal launch, the contents of this bottle are vented into space. The other bottle is used for explosively opening the hatch after splashdown. The hatch also has a valve that can vent the cabin atmosphere in one minute. The cabin has five windows, made of 0.25-inch (6.35mm) double-paned tempered glass on the inside, and 0.7-inch (1.778cm) amorphous-fused silicon on the outside. UV-ray blocking coating is applied in these outer surfaces, and non-reflective coating to the inside. The outer glass can stand up to a maximum temperature of about 1540 degrees Celsius (2800 Fahrenheit). A covering shield made of aluminum is installed inside all of the windows. A mirror to confirm the deployment of the parachutes during re-entry is installed over and under the right rendezvous window. The aft compartment is just inside of the bottom heat shield, and it is divided into 24 parts. There are 10 RCS (reaction control subsystem) rocket engines, fuel, oxygen, a helium tank, water, and many other materials. The outer walls of this compartment are removable for pre-launch maintenance. Many important materials are stored in the lower equipment bay, underneath the astronauts' feet, such as the navigation station, guidance and navigation electronic equipment, sextant to determine position in space, the telescope, a computer and keyboard (DSKY), batteries, and the communication system. Food and science observation materials are stored in compartments here. The main materials of the environmental control subsystem are stored in the left bay. This also is where the hatch is stored after the CSM and LM dock. The waste management system controls and equipment, electrical power equipment, and other electronics are stored in the right bay. Some of the food is stored here, too. Bays behind the astronauts are where the spacesuits and helmets are stored. Life vests, the fecal canister, portable life support systems (PLSS backpacks), and other equipment are stored here. The probe and drogue assembly used for docking with the LM is stored here as well. 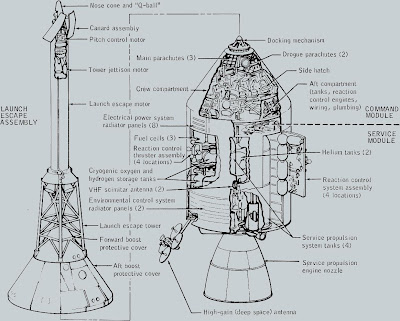 The cryogenic oxygen tank is made of about diameter 26-inch Inconel (the alloy of the nickel and the iron).
It carries oxygen of 326lb under the condition of the semi-liquid, semi-gas state.

The cryogenic hydrogen tank is made of about diameter 31.75-inch titanium.
It carries hydrogen of little over 29lb under the condition of the semi-liquid, semi-gas state.

First, before the disjunction, astronauts do pressure of CM RCS by using the electric power of SM.
A disjunction sequence begins when either one of two disjunction switchs on main console is put next.
The electric system of the CM-SM umbilical inside is turned off first.
For 10 seconds rest, tension ties which connects SM with CM is separated.
At the same time with it, by the guillotine cutter of stainless steel to move by the explosive,
cables and wires in the CM-SM umbilical is cut.
Furthermore, Roll-RCS engine of SM jets for five seconds, the flight course of SM is changed, a collision with separated CM is avoided.
At the end, Until fuel is used up or electric power disappears, thrust engine of SM keeps jetting, and SM goes away from CM.
-->Six beams made of aluminum alloys are arranged at the forward bulkhead. Compression pads are installed in three of these. Tension ties that connect the CM and SM are installed with compression pads in the other three. The CM and SM are connected by these tension ties and the CM/SM umbilical which supplies electric power, oxygen, water, and so on. The separation of the SM and CM is done automatically by a controller installed in the SM. Cutting of the connectors, the transfer of the control of the electric system and jetting of the SM RCS engine to draw CM and SM apart are done almost instantaneously at the time of the separation. First, before the separation, astronauts pressurize the CM RCS by using electrical power provided by the SM. The separation sequence begins when either one of two switches on the main console is toggled. The electrical transfer through the CM-SM umbilical is disabled first. After 10 seconds, the tension ties that connect the SM with the CM are separated. At the same time, the stainless steel guillotine cutter is fired by explosives, cutting the cables and wires in the CM-SM umbilical. Finally, the RCS engines of the SM fire for five seconds, the flight course of SM is changed to avoid a collision with the CM. Until the fuel is used up or electric power is expended, the SM RCS keeps firing to ensure that the SM's flight path stays away from the CM.
Posted by Bayourat Rocketry at 10:14 PM