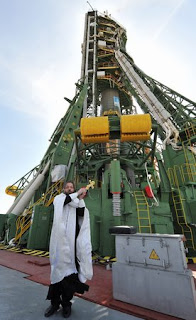 (Reuters) - Budget cuts in a program to spur commercial space taxis will likely keep the United States dependent on Russia to fly astronauts to the International Space Station until 2017, NASA's head of space operations said.

But the newly revamped program, intended to provide a commercial alternative following the recent retirement of NASA's space shuttles, comes with a silver lining: NASA is abandoning plans for traditional fixed-price contracts and instead will use less expensive and more flexible partnering agreements.

The switch was spurred by the halving of NASA's $850 million Commercial Crew program budget request for the year that began October 1 and by NASA's determination to keep at least two space taxi designs in the running for the agency's future business.

"We would like to carry two providers at a minimum, actually more," NASA associate administrator Bill Gerstenmaier said during a conference call with reporters. "We think competition is a key piece."

Other aspiring space transportation companies, including Stratolaunch Systems, the recently announced start-up backed by Microsoft co-founder Paul Allen, are not seeking or have not been awarded NASA funds to assist with spaceship development.

"Our investment helps to ensure that this capability gets done in as timely a manner as we can actually make it occur," Gerstenmaier said.

A solicitation for the next phase of the program was due to be released on Monday, but will be delayed until the first quarter of 2012, Gerstenmaier said. The selection of companies, however, should remain on schedule for next summer.

NASA, which has $406 million to spend on the program this year, is uncertain how much money it will receive to see the development effort through the planned 21-month period.

"We want to get enough work behind us that we've got a very solid design that we can then start taking into a certification," Gerstenmaier said.

The agency had hoped to have an alternative by 2016 to sending its astronauts into space aboard the Russian Soyuz capsule, which costs more than $60 million per person per ride.

"We got an increase in the budget in fiscal year '12, which was a good thing, but it wasn't quite the funding level that we anticipated. That moved the potential service capability at least into 2017," Gerstenmaier said.

The alternative contracting arrangement, called Space Act Agreements, has been used in a related program to develop commercial U.S. cargo ships to fly to the space station, a $100 billion research laboratory built in partnership with Russia, Europe, Japan and Canada that flies about 240 miles above Earth.

Space Exploration Technologies, or SpaceX, is preparing for its trial cargo run to the station in February, launching a Falcon 9 rocket carrying a Dragon cargo capsule. A second company, Orbital Sciences Corp. is expected to follow suit with its cargo craft later in 2012.

"We applaud NASA's decision to use Space Act Agreements for the next round of Commercial Crew and look forward to the competition," she said.

The difference between traditional government contracting and Space Act Agreements is night and day, added Gold, who oversees business growth for Bigelow Aerospace, which is developing commercial orbital habitats for research, government and business lease.

"It's the difference between a 30-page contract and one that could involve 3,000 pages of regulations," Gold said. "Even understanding what you're up against can take months of review by lawyers. If you want to spend more money on lawyers and less on launches, FAR (Federal Acquisition Regulation) is a terrific way to proceed."

Gerstenmaier said the alternative partnering arrangement would not allow NASA to get as involved technically in the space taxis' design, but "essentially we can enable them."
Posted by Bayourat Rocketry at 8:51 AM